Nights @ LCC in April and May

Hey guys! Rockaoke residence at LCC Shoreditch continues throughout April and May! You can view the gig listing below on this latest poster: 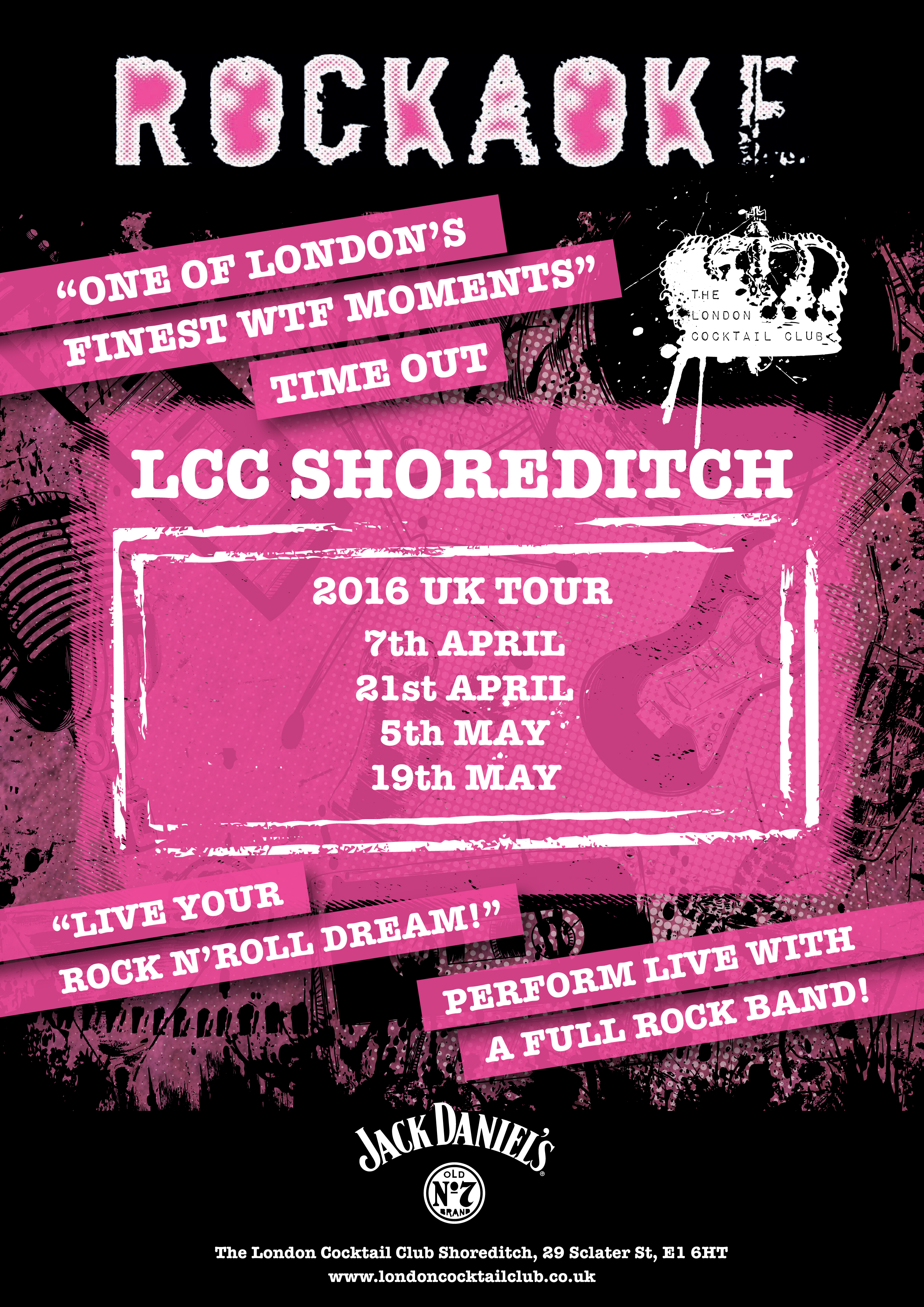 Rockaoke in aid of the Alzheimer’s Society

Here we are now, entertain us: Described by The Times as “The most fun you can have without getting arrested” and featuring a setlist of hundreds of the greatest anthems of all time, Rockaoke promises to be an unforgettable evening with something for everyone, whether you are looking for your five glorious minutes of fame or just want to lend your support to those brave enough to take to the stage. Satisfaction guaranteed 🙂

The Rockaoke train shows no sign of stopping as nights at The London Cocktail Club, Shoreditch are becoming increasingly popular. Come and join us on the 1st and 3rd Thursday of every month to see what all the fuss is about! Entry’s free, and you can wet your whistle with a special Jack Daniel’s Rocktail before jumping onstage.

If you’re curious, Rockaoke nights at the LCC look a little something like this:

Great news! We have confirmed ROCKAOKE at Standon Calling 2016. It will be the 9th year in a row that ROCKAOKE has been at the heartbeat of our favourite UK festival.

Hope to see you there.

OH YES.. @rockaoke is back THIS Thursday! Channel your inner Axl Rose and show us what you’re made of! pic.twitter.com/Q5c4Pyah1k

On the 27th October, Rockaoke were called upon by Ad2SF to help find the most talented event organisers/rock stars at their 2015 Agency Olympics! The competition was held at the O2’s Brooklyn Bowl down in London and saw events professionals from across the board all singing their hearts out for the top spot. Agencies taking part included Bluehat Group, TBA, George P Johnson, CWT, RPM, Chillisauce, Grass Roots, BrandFuel, TRO and Chew.

Adding a bit of class to proceedings was ’80s TV presenter Pat Sharp, our host and commentator for an evening of challenges that also included a bowling tournament and chicken wing eating contest – whew! The venue wasn’t bad either as Brooklyn Bowl were kind enough to lay on an open bar and buffet spread with fried chicken, pulled pork sliders and chilli chips.

It was a tough final call, but the folks at TRO managed to take home the gold and be crowned this year’s Agency Champions/Rockaoke Superstars. Click here to view the full C&IT article.

Rockaoke is coming home! (to The Leadmill)

Back in 2005, Sheffield bassist Jon Short had a band without a singer. This wasn’t an ideal position for a family man to find himself in, what with a mortgage to pay and mouths to feed, so he decided to try flipping this disadvantage into the band’s USP (unique selling point). No one else was doing rock band karaoke, and for good reason – there was no demand for it. For a year the phone remained silent.

Then one Saturday morning in May 2006, the phone rang.

It was Ibiza based entrepreneur Andy McKay who introduced himself as co-owner of the World’s biggest nightclub Manumission. He invited the band to do a season at Ibiza Rocks. Jon suggested Ibiza Rockaoke! Andy bought the domain. And when Kaiser Chief Ricky Wilson jumped on stage with them to belt out a drunken “I Predict A Riot”, all eyes and ears were suddenly on hot Sheffield band Rockaoke and their exciting new concept. 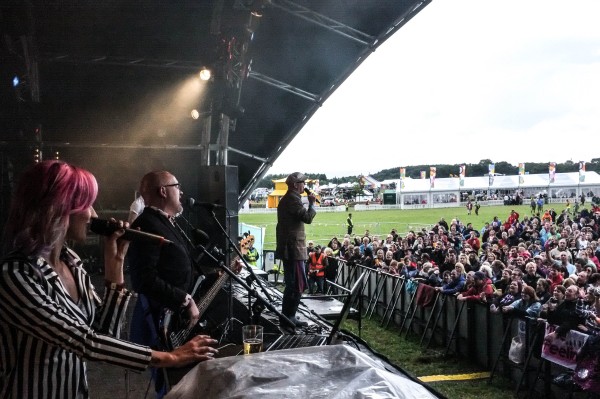 The Rockaoke band/brand/concept very quickly became a favourite London club night attraction. Iconic venues like Punk, Proud, Raffles, Cuckoo Club, AAA, Roadhouse, Koko and others all offered Rockaoke Nights. Festival appearances followed, beginning on the V2007 VIP stage with a star-studded line-up of celeb singers and an appearance in OK Magazine. Before long, the band were performing all around the UK and Europe, touring with the Chris Moyles Show, house band at Hard Rock Cafe, darlings of aftershow parties like Kerrang Awards, the Brits and Top Gear Live, getting booked for private parties by the likes of Alan Shearer, Richard Hammond and Pink Floyd’s David Gilmour, opening the show at Chris Evans’ Carfest and… well, the list goes on. 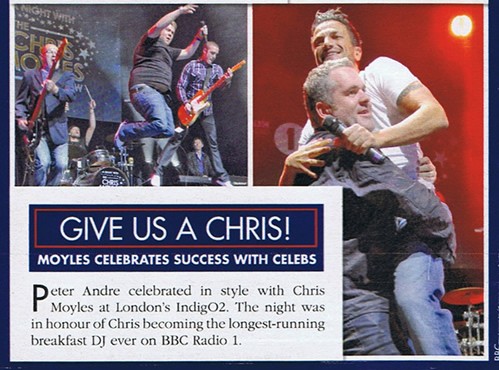 10 years and an estimated 2,500 shows and 50,000 lead singers later, the Rockaoke tour bus shows no sign of slowing down. However, with the exception of one charity event, they have never done a club night in their home town. That is – until now….

The Steel City’s music scene is famous for spawning the likes of Pulp and Arctic Monkeys, and much of this history can be retraced within the walls of the Leadmill – Sheffield’s longest running live music venue. Many of the World’s iconic acts have graced the Leadmill stage over the years, including Coldplay, Oasis, Kings Of Leon and The Killers, and on the 22nd October 2015 Rockaoke will join them!

So basically, this is a shout out to all you Sheffielders, inviting you to come along and to make your voice heard (literally) at The Leadmill.

In case you’re not familiar with the Rockaoke concept, here’s how it works.

You fill out a song sheet telling us what you want to sing. When your name’s called you get on stage and become a ROCK STAR backed by a three piece band and with lyrics provided. Once you’re up there, mic in hand, the most important thing to remember is – this isn’t the X-Factor. We don’t care whether or not you can actually carry a tune. All we look for is passion and enthusiasm, and all we ask is that you have a blast!

And to make sure you get to sing, sign-up online at www.rockaokenights.com. 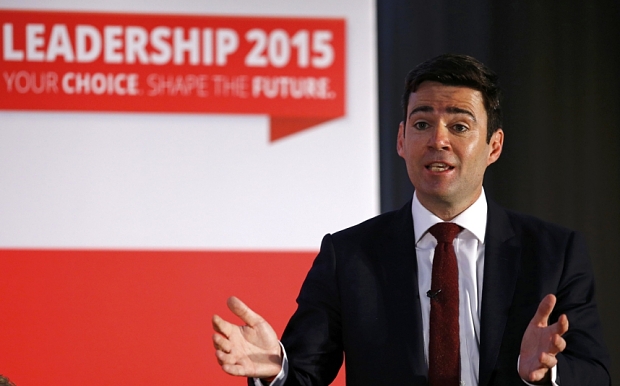 How prestigious can you get? Rockaoke have had the esteemed honour of headlining The Daily Mirror Labour Conference After Party, and what a party it was…

On September 29th 2015 the Revolution Bar in Brighton was abuzz with labour officials all eager to take a break from hardcore politics and release their inner rock gods; an opportunity that our live-karaoke band was very glad to provide! The likes of Andy Burnham and Sharon Hodgson got up to sing with the guys before man-of-the-hour Jeremy Corbyn arrived to deliver his speech and then have a little dance to F**k You by Cee Lo Green. All in all, top night!

Click the here to view the full Telegraph article.

There was also a mention in the Sunday People: 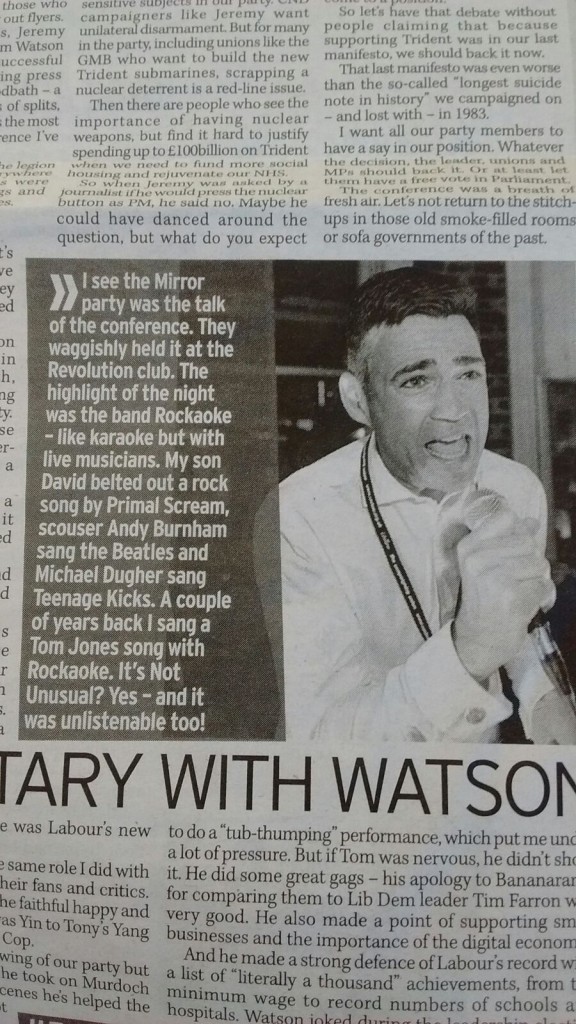 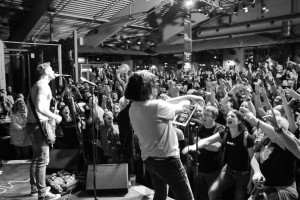 Through our regular nights at AAA in South Kensington, we made friends with some of the people who work with the rock band MARILLION. The upshot of this was they asked us to come out and play at their Weekender at Port Zelande in the Netherlands in march 2015. We were scheduled to play an aftershow party on the saturday and sunday nights – well the early hours of the following mornings to be precise.

We anticipated 2 great shows. But fair to say we didn’t quite know what to expect. Marillion pretty much invented the whole crowd funding thing and owe their continued existence to their fanatically loyal / loyally fanatical fanbase. Over the weekend, it felt like we were adopted as a part of this wonderful family the band and their fans have created. Being part of a family is just how it felt!

The 2 shows were brilliant. We were made very welcome and enjoyed playing with some fabulous performers who all well and truly bought into the spirit of Rockaoke. We all had a lot of fun!

The highlight of the weekend came around 1am on monday morning when Marillion singer Steve Hogarth (“H”) joined us on stage. We reckon he’d been performing for around 10 hours over the weekend but he still managed to muster the energy and the voice to perform 3 songs as a thankyou to his adoring fans.

The perfect end to a great weekender!!!

3 Feb 2015 Crisis at Christmas, rockaoke nights, rockaoke on the road

Rocking away the January blues

What a great start to the year for rockstars everywhere! Without much of a break from the Xmas party season, Rockaoke have been hitting the road hard, and although the tiredness levels are high, it’s been well worth it. Satisfied singers the country over have been left with no voices and great ( if not vague ) memories. Here’s a few of the kind words that we’ve had back so far:

‘Just wanted to say a massive thank you for last Saturday night – it was an awesome evening and everyone had a fantastic time, best birthday party ever – really good fun’ Amanda, Rock and Roll birthday chick.

You guys are supremely AWESOME!! Thank you so much – that was SO much fun!! What a great party. I want to do it all over again right now. Xx  Sophie, overjoyed popstar

Just a quick email to thank you and the rest of the band for making my 50th birthday party one of the best and most memorable occasions ever !  Stuart, fallen over birthday angel

‘Thank YOU for a brilliant night – everyone has been texting and telling me how much they enjoyed your musicianship, professionalism, entertainment and the ability to make everyone feel part of the evening’ Sarah, legendary birthday girl.

‘When we need a performance that can astound and include a huge variety of people- be it upward of 1000  volunteers from all kinds of backgrounds at our volunteer party, or dozens of our homeless and vulnerable Crisis at Christmas guests – we ask Rockaoke. Their incomparable showmanship and musical chops are second only to the ability to take even the shyest punter and give them 5 minutes as a rockstar’ David Littlefair – Very cool Ents Coordinator, Crisis.

Here’s looking forward to a very busy February and undoubtedly similar levels of surreal stage antics as this, found in the picturesque Hampshire village of Whitchurch.