do something funny for money

If you want to inject some real fun into your fundraiser then look no further than ROCKAOKE. The band have headlined many a successful event for non-profit organisations including Comic Relief, Crisis and Fight for Sight, all in the name of charity.

The crowning achievement of these: two incredible nights of roll n’ roll at the Empire Music Hall, Belfast in aid of the Alzheimer’s Society, the UK’s leading support and research charity for people living with dementia, their families and carers. ROCKAOKE history was made here when The One And Only Chesney Hawkes jumped onstage to belt out his number one hit from the 90s. 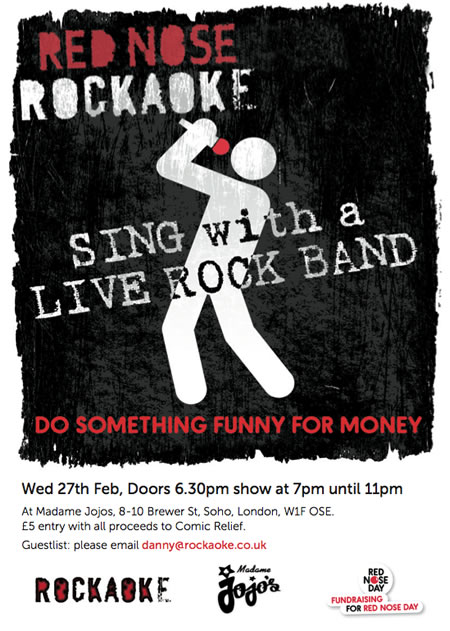 ROCKAOKE have played a part in some great events over the years. Here are a few examples. 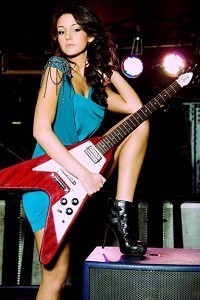 Coronation Street star Michelle Keegan has turned rock chick ahead of taking to the microphone for a night of singing for charity in Manchester .

The actress, who plays Tina McIntyre in the ITV1 show, donned spike-heeled ankle boots, a blue minidress and a Flying V guitar ahead of joining a host of other soap stars to sing karaoke, accompanied by live band Rockaoke.

Who nose the rose?

Who nose the rose? 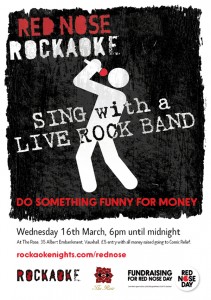 “Let em say we’re crazy, I don’t care about that, put your hand in my hand baby, don’t ever look baaaacccck”

As we valiantly sang those words at 11:32 last night I imagine most people in The Rose, especially those on stage, were questioning our sanity.

It had all started 3 and a half hours earlier, when at the beginning of our Red Nose Rockaoke night we rather foolishly guaranteed that everyone who wanted to sing would get at least one song. It’s for charity after all, what’s a band to do? And so we rocked and rocked and rocked until we had squeezed all the sweat and energy from our foreheads, strings, drums, lights, the rockstars, the pub and it’s staff. I’m pretty sure the door said “thank f@*k for that” when I closed it on the way out.

By the time the third set came around, the last tube catchers had made theirs moves and we were left with a slightly smaller, unquestionably drunker but nonetheless resolutely rocking red nose massive. They were in for a treat however as we unleashed a volley of dirty rock anthems to tie the night up. The might of Starship’s Nothing’s Gonna Stop Us Now carried us all home on a Red Nose shaped cloud and even now my ears are still ringing. All in all we busted through the best part of 40 songs in 3 hours, raised around £900 for Red Nose Day and agreed that this felt like the start of a beautiful relationship.

This year The Rose, next year Wembley.

ROCKAOKE have been working with CRISIS, the national charity for homeless people, for many years.

Each year, between Christmas and New Year, the band head down to the Crisis shelter in London to spread a bit of seasonal cheer. Singing with a live band is always a big hit with the guests at the shelter and it is always one of the band’s favourite gigs of the year.

They usually find themselves in good company too. One year they arrived to find a young ginger haired lad on stage before them. They congratulated him on his performance, which was great! Little did they realise it was an as yet unknown Ed Sheeran!

Some of our favourite photos from the most amazing ROCKAOKE fundraisers.

Rockaoke at The Empire Belfast in aid of the Alzheimer’s Society.

The Rockaoke guys and girls are truly awesome! They delivered 3 brilliant fundraisers for Red Nose Day helping to raise over £3,000 for Comic Relief. They kindly donated all of their time and energy for free to help raise as much as possible for the cause and its always a cracking night & utter carnage! DO IT.

Wow, what a night! Just wanted to drop you a note to say‎ a huge huge thank you. Everyone is raving about you all! The stage looked amazing and you’re such great musicians. Matt you were a fab MC and also so very helpful at the set-up stage. I knew it could be a great night, but you all made it one of our most memorable parties – ever! Thank you once again for making everyone’s night/week/year/decade….!

When we need a performance that can astound and include a huge variety of people- be it upward of 1000 volunteers from all kinds of backgrounds at our volunteer party, or dozens of our homeless and vulnerable Crisis at Christmas guests – we ask Rockaoke. Their incomparable showmanship and musical chops are second only to the ability to take even the shyest punter and give them 5 minutes as a rockstar. They’ve been a huge hit for us and we thoroughly recommend them

Hey there, I just wanted to drop you an email to say thanks very much for the gig on Thursday last week. An awesome night, everyone had a great time.
Just need to confirm the figures, but we believe it will be around £2500 raised towards our £48,000 target. Top man, thanks to you and the other gents Mat. Legends.

Please forgive the delay in sending this but I have not been back at Crisis HQ since the event until today. I hope I expressed on the night how grateful we all were for your involvement.  The members you performed with were clearly having the time of their lives, I spoke to Henry immediately after he came off stage and he apologised to me as he said it was such a great experience that he was short of words.

One of the Crisis staff in attendance, who works with the members on a regular basis, was blown away by the performances and said that it was the best Crisis event that she had ever been to.  She hadn’t even been drinking at that point!

Your professional but relaxed approach made you a pleasure to work with and made my job so much easier.  I’m now proclaiming to be officially your biggest fan/groupie.

Thank you again guys, I hope you know that it made the night for the volunteers to have you there and gave the members an experience that they will never forget.

I’m sorry that it has taken me so long to get round to emailing you to thank you for a brilliant night last Saturday. We’ve had fantastic feedback from the party and the volunteers loved your slot. You really made it a night to remember and it seemed very fitting for a volunteer thank you party as it involved and bigged-up the volunteers in a way that no other band would have done! So many many thanks. Fancy coming back next year?! If you do please do pencil us in- its the same night every year (first Saturday in January).

The night was a great success and you were such a huge part of that. The children, young people and their carers had an absolute ball.I think you’ve inspired some of them to lift up a guitar (real and inflatable) and be creative.
Your interaction with them was just fab, we couldn’t have asked for more.

Thank you for making our first ever CareDayNI so special.

I just wanted to say on behalf of Fight for Sight, we are very appreciative of your support at this 100% Optical event. Mat, you did a fantastic job at rallying the crowd, and the concept works so well. Your team are a well-oiled machine and I was amazed by the whole thing.

Rockaoke in aid of the Alzheimer’s Society

WHO DARES SINGS… … GRAB YOUR MATES, A RED NOSE, AND PREPARE TO LIVE THE DREAM WITH THE WORLD FAMOUS ROCKAOKE BAND! ROCKAOKE are fundraising for Red Nose Day again, this time by hosting a special event where DARES are the order of the day. Why don’t you pay for your friends to sing a […]

Please join us in our efforts to raise money for all those affected. We are having a fundraising evening packed full of great entertainment The massive earthquake and resulting tsunami that struck Japan on 11 March have caused widespread destruction and suffering. More than 8,000 people have died in the disaster, thousands are injured and […]

book rockaoke for your charity event