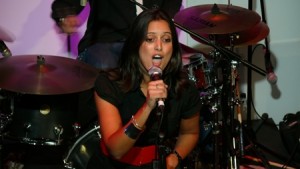 Competitors from 8 rival commercial radio stations jumped on stage with ROCKAOKE @ Sound, Leicester Square for this “Commercial Radio’s Got Talent” event. The high-tech stage set, celebrity judges and host helped set the scene to create an unforgettable experience for both singers and audience alike. And for the band of course who had a great night, made a lot of new friends, ran up an immense drinks bill afterwards and made a very unfortunate rickshaw pilot take them back to their Kings Cross hotel.

Songs ranged from Dolly Parton to Dakota, Stevie Wonder to Spice Girls. The winner sang (and played drums dressed as a gorilla) the very topical “In The Air Tonight”, which was featured on a popular Cadbury’s chocolate TV ad of the time.

RAB – Chloe Jarman sings “What I Am”

talkSPORT – “In The Air Tonight” by Phil Collins