How do you follow the biggest events of the year?
By jumping on-stage and rocking out with your very own live band!

ROCKAOKE have been invited to perform at a stunning array of high profile media events in recent years. Such as:

TOP GEAR LIVE after shows 2010-15 at Birmingham NEC and secret locations – always with Clarkson on drums, Hammond on bass and May on Keys;

The European Ryder Cup Team’s official victory party at Gleneagles in 2014 – with sing a longs from Ian Poulter, Lee Westwood and Miguel Angel Jimenez ( and his cigar );

The Commonwealth Games 2014 – Giving the athletes a chance to turn from track stars to rock stars in their village;

The London 2012 Olympics & Paralympics – Rocking out in the Athlete’s Village;

Pride of Britain Awards 2011 aftershow at The Grosvenor;

THE BRITS aftershow 2010 at Earls Court;

Kerrang Awards 2008 aftershow at Egg, Kings Cross – with performances by ALEXIS ON FIRE and BRING ME THE HORIZON (see below);

Stuff Awards 2008 aftershow at The Dorchester;

The band were also asked by Mercury Records to rock a launch party for BON JOVI’s Greatest Hits CD @ CARGO, Shoreditch. 15 Bon Jovi classics were added to the set list, the band became BON JOVI-OKE for one night only and made some die-hard BON JOVI fans’ dreams come true. 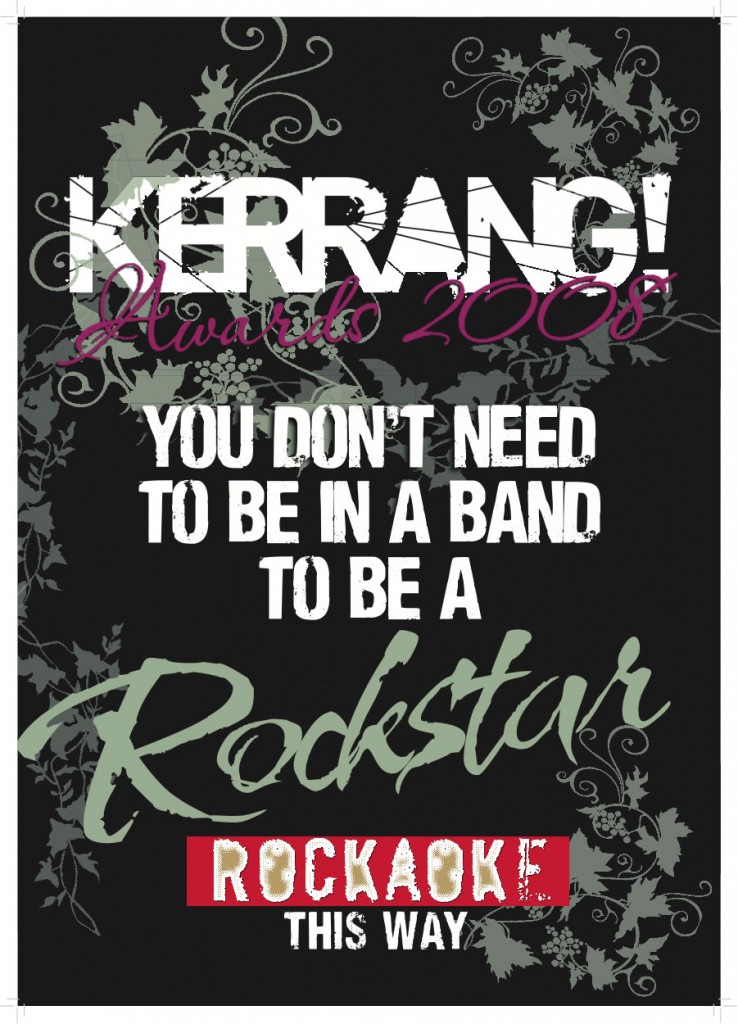 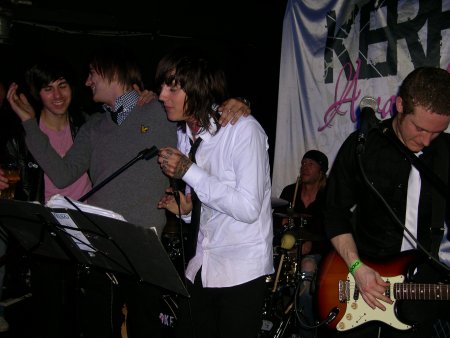 ROCKAOKE gives even the biggest superstars that unique opportunity to fulfil their rock star dreams!

Of course, ROCKAOKE’s work with Chris Moyles and Chris Evans has led to them sharing the stage with the odd big name celebrity. But there’s much more…

ROCKAOKE were regulars at the TOP GEAR LIVE aftershow party – a very private affair for the presenters and their inner sanctum – and more recently were invited to play onstage during the first and last ever CLARKSON, HAMMOND AND MAY live show. Sorry – no photos or videos. You will have to rely on your imagination to visualise Jeremy Clarkson blasting out searing versions of ALL RIGHT NOW and CAN’T GET ENOUGH OF YOUR LOVE, as well as high-octane re-workings of pop standards “MUSTANG SALLY” and “DON’T STOP ME NOW”, featuring both Clarkson and James May on drums and rock-solid Richard Hammond on the bass. AMAZING…!

In april 2012, ROCKAOKE were the headline act at the birthday party of Pink Floyd guitarist DAVID GILMOUR’s wife POLLY SAMSON. Again, no photos – sorry! A star-studded array of guests (including Ringo Starr…!!!) watched David’s band open the show playing songs from his “On An Island” album plus a few Pink Floyd oldies, before ROCKAOKE took to the stage giving the Gilmour family and guests the opportunity to steal the show…!

This followed on from a stellar 2011 during which the band rocked the Mercedes Brawn Xmas party, persuading Michael Schumacher to close the night alongside Nico Rosberg and Ross Brawn belting out an epic Bohemian Rhapsody. There was also Denise Welch’s Ice Fantasy Ball, The Pride of Britain Awards after show, and two nights as the official VIP rockers at the Foo Fighters gigs at Milton Keynes Bowl.

ROCKAOKE have performed with a host of top celebrities at other events like:

nights with the CHRIS MOYLES SHOW;

Some of our favourite photos from celebrity/hi-pofile events.

Last Ever Top Gear Live (with Clarkson, Hammond and May) – November 2015

Nights With The Chris Moyles Show

THANK YOU for being such a fantastic band – everyone loved you guys and we had an absolute ball. Rage Against the Machine was a highlight, but to be honest it was all just brilliant. We’ll certainly be recommending you to anyone who will listen!

Rockaoke is a night out like no other. It’s not just people singing with a band, they make it feel like a festival, with headline acts and old favourites. Not in a crappy backing track Karaoke way, but with a full band, on a stage, with lights and guitar solos! For one night, we were all rockstars!

One friend came to me after his stint on stage and told me he felt like the coolest man on the planet, and many others have since told us that it was the most fun they’ve ever had at a wedding.

How prestigious can you get? Rockaoke have had the esteemed honour of headlining The Daily Mirror Labour Conference After Party, and what a party it was… On September 29th 2015 the Revolution Bar in Brighton was abuzz with labour officials all eager to take a break from hardcore politics and release their inner rock gods; an […]

Radio 1 DJ Chris Moyles has announced that he will be touring the country with a full live band later this year. The DJ will broadcast his final show as the host of the Radio 1 Breakfast show on Friday (September 21) and will then head out on tour in October with his cast of […]

STARS came out for a night of celebration to mark Toon record goalscorer Alan Shearer’s latest milestone. The great and the good from the worlds of sport and celebrity turned up at the ex-Newcastle United ace’s home for his 40th birthday bash. They turned up for the glittering event at the former England skipper’s plush […]

book rockaoke for your event